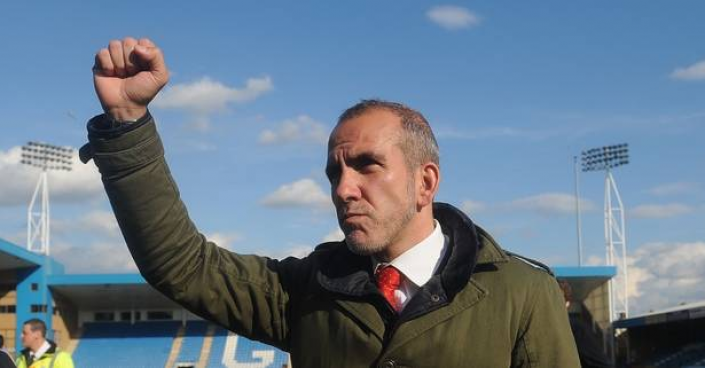 Chris Hughton’s sacking means the bottom seven clubs in the Premier League have all dispensed with at least one manager this season but have the replacements done any better?

Judging on a ‘points per game’ basis would be fair but with such a small sample size this figure will be heavily influenced by chance.

Instead of working with a ‘points’ measure we are using shots data. The plentiful supply of data means results will be less reliant on luck and won’t be so heavily skewed by a small sample size. 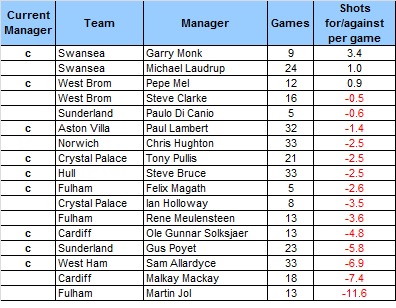 Our analysis shows that every new manager has improved on what’s gone before apart from Gus Poyet.

Gus Not Good Enough
Paulo Di Canio lasted a paltry five games into the season but his Sunderland team competed much better than the Poyet version. The Uruguayan generated goodwill from two cup runs but his team are ‘out-shot’ by almost six attempts per game. Those kind of numbers add up to relegation (1/5 William Hill); perhaps Di Canio’s sacking was premature?

Rose-tinted Mackay
There’s no denying Vincent Tan has made some peculiar decisions during his time at Cardiff but was sacking Malkay Mackay one of them?

The Scottish manager earned a huge amount of credit by taking Cardiff into the Premier League but once there his team struggled, even when results didn’t seem too bad. In 18 matches Cardiff were ‘out-shot’ by on average 7.4 shots per game. They were an accident waiting to happen and the fall was only delayed by David Marshall’s heroics in goal.

Ole Gunnar Solksjaer has improved the shot deficit since his arrival but the numbers are still poor and relegation looks a certainty at 1/10 (Bet365).

Fulham Find Right Man Too Late
It’s amazing looking back at exactly how bad Fulham were under Martin Jol - a -11.6 shot supremacy is truly wretched.

Rene Meulensteen was an upgrade, in the same way one broken leg is an upgrade on two, but it’s taken until Felix Magath’s arrival for any semblance of hope to return to the Cottage. It might still be too little too late.

Other Titbits
Swansea and West Brom have improved under new management but they were starting from a higher base. Both teams are worthy of mid table positions and should move away from the drop zone in the final weeks.

Chris Hughton’s sacking can be taken two ways. Norwich weren’t pulling particularly good numbers but they almost certainly would have stayed up with him in charge. A new management team means we shuffle the deck but can only judge them at the end of the season.