How To Pick Winners

Our racing expert gives a detailed explanation on how he studies a race. Includes explanations about draw bias & speed ratings.

I’ve had many emails over recent weeks asking how I make my horse racing selections, so I thought this would be an ideal opportunity to explain my methods. It is worth noting there is no ‘right’ way to make money from racing, this just works for me.

The race I’m using as an example is the 7.05 Folkestone (12 July 2012). During the flat season, I tend to specialise on five & six furlong races for older horses. Where possible I have included references for further reading.

2. Draw Bias
Particularly in sprint races horses are susceptible to draw biases. This is where one part of the track is advantageous. Draw biases vary from track to track and even from meeting to meeting, so it is important to keep an eye on recent results. (ref. Betting on Flat Handicaps by Jon Gibby)

Betting Bias have a guide to every racecourse in the UK which summarises the draw bias.

Folkestone Draw Bias:  Strong – The highest three stalls are favoured. Racing against the stand’s rail is a big advantage.

3. Pace Bias
I try and picture how the race will be run. Will it be slowly, evenly or quickly run? In slow-run races, front-runners are favoured, but if the gallop is too strong hold-up horses have an advantage.

To determine the pace of the race I follow a method used by Jon Gibby in ‘Well-Handicapped Horses’ and rank horses by their early speed. Looking at their last three runs, they are awarded points on how prominently they raced. The horses with the highest numbers are deemed the ‘pace-makers’. 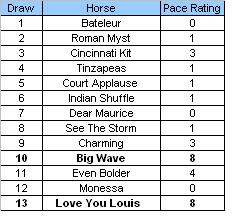 Looking at the pace chart there are two likely front-runners: Big Wave and Love You Louis. Assuming their jockeys don’t get in a pace duel the race should be run at an even gallop. The most important factor is that all the pace is drawn high. Combined with the draw bias it means horses drawn low are severely disadvantaged. Not only are they forced to race on the slowest part of the track but they are also detached from the pace.

4. Ruling Out
The next step is simple form study. Going through the field and ruling out horses who aren’t capable of winning the race. I work through the race in order of the draw.

Bateleur
Poorly drawn and winning form is over 6f or a stiff 5f track.
Roman Mist
Shown nothing in his races to date
Cincinnati Kit
Shown nothing in her races to date
Tinzapeas
Shown nothing as a 3yo and unlikely to have the pace on her first try at 5f.
Indian Shuffle
Well beaten on his last two starts of 2011 and 311 days absence suggests something was amiss.
See The Storm
Struggled to be competitive in Class 6 & 7 and this class 5 race is tougher.
Even Bolder
Hasn’t won a race since Jan 2010. Record of 3/58 on turf suggests he is difficult to win with.
Monessa
Still a maiden and beaten by 16 lengths on her seasonal reappearance.

5. Detailed Study
I have narrowed down the race to 5 potential winners and now comes the detailed study. Looking at past performances my aim is to predict what sort of rating they will run to. I create my own speed ratings (ref. Mordin On Time by Nick Mordin) but the Racing Post and Timeform also provide ratings, accessible for a small fee. Ratings on their own tend not to mean much; I use them in relative terms to compare horses’ performances.

I also use video form available from Sportinglife.com and Attheraces.com to watch past races. My aim is to find something that wasn’t covered in post-race reports; perhaps the horse met trouble in running or ran well against a strong pace/draw bias.

Court Applause (drawn 5)
Poorly drawn and only 1 win in 16 starts suggests he finds it difficult to win = 63.5

Dear Maurice (drawn 7)
Only 2/33 but tried over a variety of trips and potentially unexposed at sprinting. Beaten in a lower grade last time out, the easy 5f might seem him tapped for pace = 64

Charming (drawn 9)
Still a maiden and having her first race in a handicap. Lacks experience. This only her fourth career start and could struggle against more battle hardened sprinters = 62+
(the + symbol suggest she has untapped potential to improve beyond this rating)

Big Wave (drawn 10)
Easy 5f should suit as she has raced too keenly over 6f. Lost her last two starts in class 5 handicaps and might not be good enough = 64.5

Love You Louis (Drawn 13)
Reported to have moved poorly on his last start when well beaten at Newbury. Has run below par on his last two starts, both times on good to soft, suggesting the ground was against him. Outclassed when racing in a class 4 race at Newmarket (17 May). Most reliable indicator of his form was his 3rd place at Yarmouth (10 April).

Has the best draw, and record at Folkestone is 1-1-3; only defeat was in a class 4 race. Jockey Pat Dobbs an eye-catching booking; he has a 50% strike rate on the horse.

According to my analysis Love You Louis (15/2 Betfred) is the most likely winner but that doesn’t automatically make him the best bet. You must always consider the odds; if Big Wave was a bigger price, such as 10/1, then he would become the value selection. It is easy to shop around for the best odds by using our odds comparison service.

I hope this walk-through provides an insight into my thought processes when studying a race. If you have any further questions then please email help@bettingbias.com or tweet @bettingbias